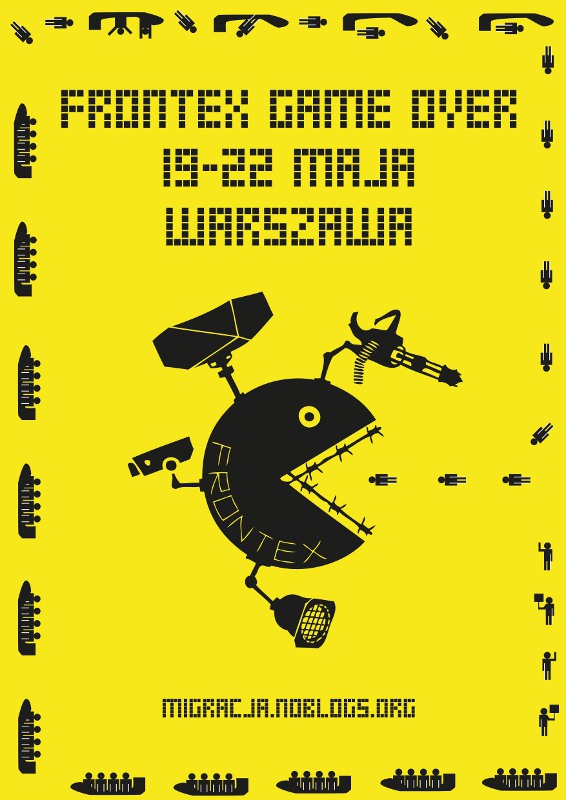 On May, 21st, 2015 the crème de la crème of European racism will gather in Warsaw, Poland, to celebrate the 10th anniversary of the creation of one of the most influential meta-organisations that guards assets of the Fortress Europe. The organization, not widely known, until recently standing in the shadows, is a hybrid of border police and intelligence service, as well as aggressive promoter of anti-migrant policy. Frontex (from french Frontieres exterieurs), being discussed here, is the executive body of EU (anti)migration policy – enjoys autonomy in decision-making (for EU foreign policy), and has a yearly growing budget, which is not
accounted. Budget, used to finance futuristic projects, straight from distopia, like an automatic system of land drones, known as TALOS project, carried out in cooperation that included Warsaw University of Technology, Israeli Aerospace Industries and a lot of other military corporations.The trust also allows them to conduct their own foreign policy on migration – dealing with the neighboring dictatorships (Belarus, Libya, Tunisia, Algeria), sponsoring and organizing repression against refugees in a secure buffer zone, which blurs responsibility. As a result, the border of Europe moves farther away from the ‘old continent’, helping to hide the effects of this policy in the eyes of Europeans. Sponsored camps in the countries of the global south and ruthless anti-human migration policy of the EU countries result in real victims – tens of thousands of people drown, starve, are left at sea or desert, or are directly shot – every year more than at the Berlin wall in the entire time of its existence.

Refugees are pushed out of their home countries by pillaging neocolonial economy, conflicts fuelled by the seller of weapons, environmental disasters included in the cost of the European wealth, and finally imperialist invasions, and often have no choice but to flee in the direction of ‘European paradise’. The increasing stratification, hunger, poverty and fear motivate them to walk through deserts, passing oceans, and clinging to aircraft wheels, often submitting themselves under organized smugglers mafias. Frontex’ activities only add more kilometers and obstacles; without breaking Europe’s hegemony and its neo-colonial policies the determination, which families and sometimes entire villages rely on, of those people will never be reduced.

Usually tragedies are happening far away from the eyes of Europeans, but their scale, with an increase in the number of refugees (eg related to the events of the Arab Spring, the massacre of Afghanistan, the Syrian and Ukrainian war), had grown so much that it is impossible to keep ignoring them. Mass drowning off the coast of Italy and assaults on the borders of Ceuta and Melilla, death on the Evros minefields and barbed wire of the Bulgarian border are just a few examples of the tragedied, which become increasingly larger and more frequent as the social crisis in neighboring countries
deepens. The crisis, which often is the result of European foreign policy, economic colonization or direct military intervention.

In recent years, these events and harsh criticism led to changes in Frontex’ PR policy. Trying to introduce themselves as a humanitarian organization (mitigating the problems that it creates) or fighting the smugglers (for which it creates jobs) excelling itself in hypocrisy. However, its mode of operation is still deepening humanitarian crisis, simply looking at last naval operation, which banned the Italian crews rescuing refugees outside the coastal belt, or cooperation with organized crime, including the state run one, in Morocco and Libya.

For those who survive the long and dangerous journey to Europe, the problems do not end there. They just change their character. Undocumented immigrants become the target of anti-migrant domestic policy. They are not totally excluded from the social order – there is a place for them in slave labour, as victims of police violence, and locked up in detention centres. The position of all migrants in the EU is very difficult, the racist policy model is proved with even a look at the fate of the refugees of war (even minimal humanitarian standards recognized by the EU Member States are not met). An attempt to legalize the residence is a bureaucratic ordeal, usually resulting in criminalization, since the rules were constructed so that conditions are unattainable. The entire apparatus, set solely on repression and criminalization, serves the economic interest of the European Union, even though ‘great’ European cities are built with slave labor of migrants whose legal harassment usually strengthens the position of employers. CEO’s offices are cleaned up with hands of invisible migrants. Also the position of local workers is weakened by lowering labor cost. This machine is oiled by everyday racism of neo-fascists who let out their scapegoat aspirations in pogroms, denunciations, or work in the uniformed forces. This dramatic situation does not remain unanswered: in closed centers erupt hunger strikes and revolts, deportation are blocked – migrants know that they can count only on themselves, so they organize protest marches, occupy spaces, squat, resist evictions and confront the fascists.

We do not accept the policy of Euro-racism! Any innovation of repression we will answer with grassroots, anti-capitalist forms of brotherhood and sisterhood. As in the case of operation Mos Maiorum(the largest roundup in the history of post-war Europe), and other counter-information projects, warning actions, interactive maps of round-ups, and solidarity refusal to show documents by people holding them, which allowed many migrants escape the net casted by Frontex. Despite this 19,000 people were arrested, which for us is a call to intensify resistance. Also here, in Warsaw, where Frontex has its headquarters.

The last wave of hunger strikes in Polish camps, though brutally suppressed, helped forge contacts between prisoners and support groups, so that information about the strike came out. One of the ringleaders of the strike, Ekaterina Lemondżawa, is publishing a book on her experiences, in cooperation with the Warsaw NOII group.

For many years, Antifrontex Days have been organized in Warsaw- its the time to give them a new impetus and strengthen each other’s voices of protest. Thus, together, we, migrants and allies, invite you for the Antifrontex Days, which will take place in Warsaw on 19-22 May. We are waiting for you with meetings, screenings, emonstrations, and associated Activist Days Off festival.

We invite groups willing to take an active part in the organization of the event. We are a small collective from Warsaw, which together with you want to work together deconstructing our privileges and abolishing the boundaries imposed on us. When migrant circles in Europe come together in resistance and repression is on the rise, we can not remain passive. Unite against institutional state fascism – in the name of a real and practical transnational solidarity!

Come to Warsaw, 19-22 May! Let’s create a strong front against Frontex!

For those who cannot come to Warsaw between 19-22 of may, we are proposing to do decentralized days of actions against Frontex. Let it be heard/seen everywhere during these days! We’ll leave the form of solidarity up to your limitless fantasy. You know the best what’s most useful in your local context, and where it hurts most.

Down with the borders! Long live active solidarity!